Temporal aspects of a popout

Our perception is coherent in the sense that we perceive the world around us as a complete and stable image with all elements appearing simultaneously. However, the processes underlying our perception do not all take up the same amount of time: Depending on magnitude  (e.g. brightness) and feature type (e.g. orientation, color) some aspects will be processed faster than others. The fact that the depth of processing is time dependent and eye movement destinations are not necessarily based on the same processes that underlie our perception, raises the question on what the destination of an upcoming saccade is based. Here we specifically look at the possibility that not all objects in a scene are processed at the moment a saccade destination is decided upon and the decision is made based on only partial processing. Before discussing how we investigated this, I will provide a little background on what has previously been found and how it led to our hypothesis.

When you are told to make an eye movement to some specific element and it pops up on screen it takes some time before your gaze shifts toward the element. The period from the appearance of this stimulus material, until the eye starts moving is called the saccade latency. If you were to perform the same task over and over again this latency will vary, being shorter than average on some trials and longer on others. Interestingly, the destination of the saccade tends to depend on the duration of the latency: Shorter latency saccades are more biased towards salient objects (those that deviate from their surroundings), while longer latency saccades typically aim for objects that resemble the object we are looking for. One setup in which this behavior has been observed many times uses a field of vertical lines with two orientation deviations. One slight deviation marks the target and one larger deviation marks a salient distractor. Typically short-latency saccades are heavily biased towards the salient distractor, while only at longer latencies participants correctly select the target. While this finding has been replicated numerous times, the underlying cause is still debated. One twist on this finding is reported in a study that introduced a simple adaptation in the instructions: Rather than making the less salient deviation the target, participants were instructed to select the more salient deviation. Again, most short-latency saccades aimed for the more salient element, however, with longer latencies, performance deteriorated and the less salient element draws more eye movements. Thus in essence, with longer latencies, saccades selected the target less rather than more frequently. The authors concluded that salience is a transient phenomenon. 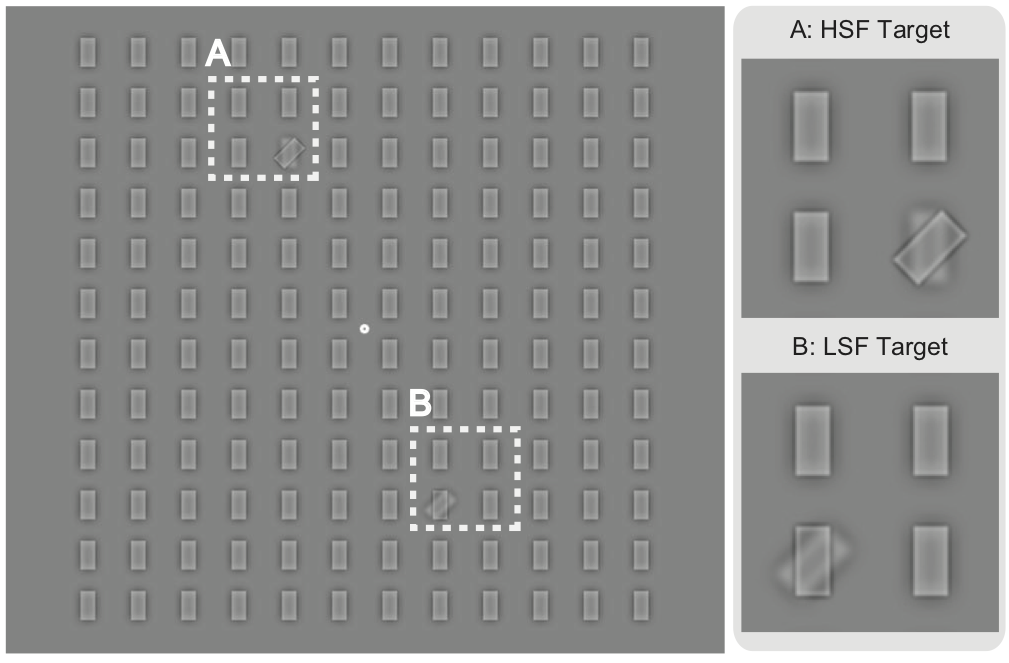 We hypothesised that these results can be explained by limitations in processing time for shorter latency saccades: What if, at the moment the upcoming saccade destination is decided upon, only the more salient element is available to the saccadic system? If the second deviation is not yet detected in the saccadic system for short latency saccades, it cannot compete for the destination of this saccade. While, many of the previous findings can be explained using this rationale, the main challenge tackled in the current study was how to design an experiment to scrutinize this hypothesis. From a stimulus with several deviating orientations it is difficult to estimate what is processed when. While we (humans) do have higher sensitivity for cardinal orientations, there is no evidence that one orientation is processed faster than the others. It is still very plausible that when a larger deviation is inserted into a regular grid it will be detected faster than a smaller deviation, but because we do not exactly know the mechanism behind this, it is difficult to construct a proper test of our hypothesis. Rather than trying to create deviations in a single grid that are processed at different speeds we came up with a different approach utilizing so called hybrid images. Hybrid images are created by filtering two images at different spatial frequencies and then overlapping them. For the current experiment this allowed us two create two independent grids each with an identical deviation, one element rotated at 45 degrees. Because lower spatial frequencies are processed faster than higher spatial frequencies, filtering one grid at a lower spatial frequency and one at a higher spatial frequency allowed us to create a situation where one grid was processed faster than the other. Considering, other than the filtering of the grid, the deviations are identical, it can safely be assumed that the deviation in the grid processed faster is detected before the deviation in the grid that is processed slower. An example of the stimulus can be found in the image above this paragraph. The dotted boxes A and B are there to highlight two cut outs of where the targets are. On the right of the image I have displayed these at a higher resolution. At the top you see the deviation in the high spatial frequency grid (HSF Target) and in the lower element you see the deviation in the low spatial frequency grid (LSF Target). At both deviations the same visual information is present, the only difference being that in one case it is the high spatial frequency component that is rotated, while in the bottom setup the low spatial frequency component is rotated. At the other three positions in each cutout the low and high spatial frequency component are also present, but now blend into a single rectangle because they are aligned.